(Image: My first chemo session with my boyfriend, Gino, and best friend, Sylbeth. My parents were there as well.)

I remember reading my biopsy diagnosis with my boyfriend, Gino, at the doctor’s office. I studied Medical Science at university and majored in Immunobiology (ironically), and I knew what lymphoma meant. But I had to hear it for myself so I asked, “what does that mean?”

“Cancer of the lymph,” my doctor said.

My life put on hold?

I’m twenty-four years old and I got my diagnosis about two months ago… it was two weeks before I was meant to start my final practicum to become a primary school teacher and finally graduate. It also happened to be the week after me and my boyfriend’s three year anniversary. I didn’t know what was going to happen…

At the time, I was doing a Master of Teaching (Primary), I had uni two days a week and I was a substitute teacher the other three working days. I tutored families for an hour or two after school. I went to the gym when I could. I loved to sew, so I would spend all my spare time sewing, and I had just started this blog.

With my cancer diagnosis I didn’t know where all of that was going to go. I worked on a routine, a busy one, but I liked it and I loved everything I was doing… teaching, tutoring, uni, sewing, gym…

But the past few months started making sense. I was getting tired more quickly than before. I also noticed a flight of stairs would get me out of breath — I thought I just needed to go back to the gym! My appetite was lower as well and I got sick so many times this year. I had a nagging cough for two months!

Thankfully this cancer is curable. When I googled it (which I did a lot because I couldn’t help it), I found the survival rate is 85%. My haematologist joked that out of all the cancers to have, this one would be the best one. So although I knew that the road was going to be tough, there’s a light at the end of the tunnel.

After all the scans and results I finally got the stage of my cancer and the treatment plan. It was stage 2 cancer early-intermediate and it only spread to two parts of my body, my right neck and right chest. The treatment plan for me is to do four rounds of ABVD chemotherapy until October and radiotherapy at the end.

On the 25th of June, 2018 was my first chemotherapy session. Receiving chemo itself was fine, but going home and the week of side effects was a bitch. Nausea, not being able to eat properly because my taste buds were in pain, lethargy, waking up in sweat, bowel issues, vomiting, constantly being in and out of sleep, and hair loss. I broke down crying twice. Just because of how difficult it was.

The second time I cried was while I was feeling nauseated and vomiting. It was the sixth day after chemo but the first time I vomited. In that moment, I felt like I didn’t want to do chemo anymore. My family all comforted me, and when I woke up from my nap my dad came to my room and told me a story.

He used to be a sailor, and on his first job from the Philippines to Japan he felt so nauseated that he told himself he was going to quit the moment the boat landed in Japan. But, he realised that he would have a better future and so he decided to stay. If it weren’t for that decision he wouldn’t have met my mum, and me, my sister and brother wouldn’t have been born.

On the days I’m not nauseous and when I have the strength, sewing has been therapeutic for me. I’m not allowed to teach in a classroom because being in a room with thirty primary school children in winter isn’t the smartest thing to do when your immune system is suppressed. So out of everything from my busy lifestyle before (of teaching, tutoring, gym, sewing and uni), sewing is the only thing I have left. Having cancer gave me the opportunity to really throw myself into sewing more and fall more in love with it.

The flip side of it though, is body image. At first, the thought of losing hair scared me. I thought I was going to be too unattractive for this blog and so I didn’t know whether I still wanted to model my own clothing. The thought of becoming unattractive got to me that when I’d see a nice outfit in the shops I’d think “what’s the point of buying this? I’m going to be bald and ugly anyway.”

I’m not sure how it hit me, but I realised being bald isn’t that bad… it’s actually badass! Like the Wakandan Warriors from Black Panther (future sewing project?). There’s something beautiful about a woman who can carry themselves confidently, and the bald Wakandan Warriors are no exception. That’s why I’ve decided that no matter how I look during treatment, I’m going to carry it with confidence and continue modelling my own creations. I’ll also take this opportunity to experiment on new looks with different wigs and head coverings!

I realised that I’m not the only girl out there who’s losing hair because of cancer and I have this blog as an opportunity to give other people hope. To let everyone know that there’s beauty in everyone, no matter what their shape, size, or skin colour.

Not only do I want this blog to be about sewing and fashion, but I also want it to promote positive body image and to redefine the standards of beauty. I want my blog to inspire cancer patients like myself and everyone to find confidence in themselves.

What did I learn about love?

“For love to be real it must cost, it must hurt, and it must empty one of self.”

This is a line I’ve certainly learnt to understand the more I’ve gotten into treatment. It’s become more clear to me how much love and suffering are intertwined. I’ve seen the amount of sacrifices everyone has made for me since I was diagnosed with cancer. My parents, siblings, boyfriend, extended family and friends have made sacrifices that cost, hurt and emptied them of selves. That’s how I know their love is real. Through all their suffering there’s joy because the love is real.

Now it’s my turn. Like I said previously, chemo is a bitch, but I’m going to keep pushing for the people I love in my life, so I can have a better future with them and also my future family.

I’m a Christian. I’m a Catholic. And sometimes among midst of suffering, faith could get confusing. This video helped me get through it:

As cheesy as all this sounds, it’s going to be a tough road. But I see the beauty in all the suffering we endure and the sacrifices we make for one another.

“Genuine love is demanding, but it’s beauty lies precisely in the demands it makes.” 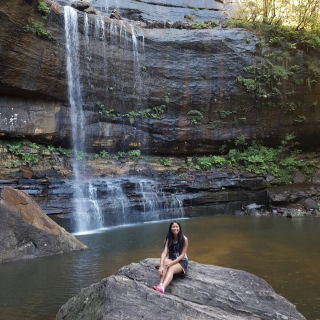 Hey! My name is Steph and I’m from Sydney, Australia. I’m a primary school teacher who loves eating, hiking and sewing. Welcome to Dressmaking Diary!